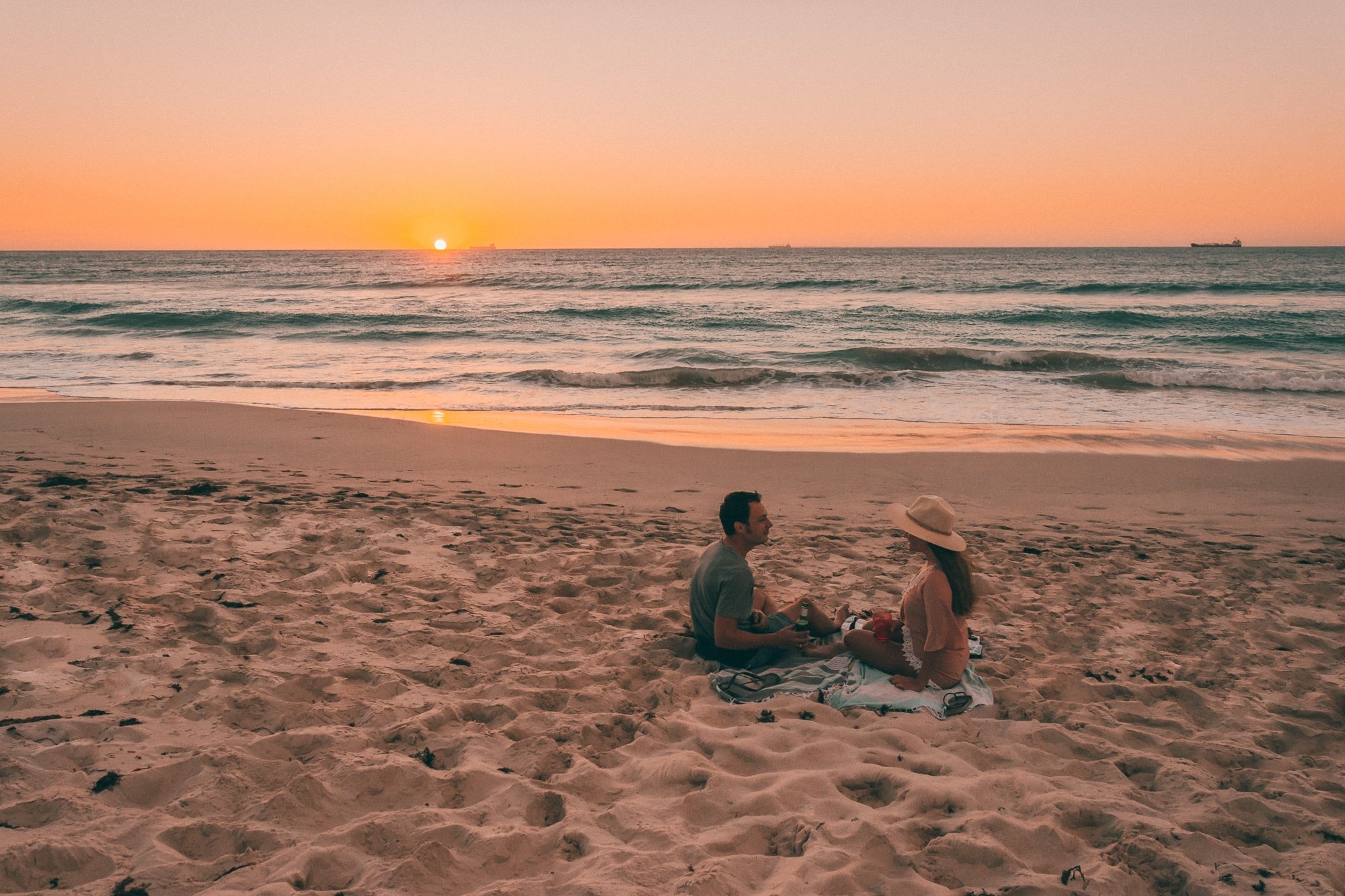 A special story today, because we have been traveling for one year already! A year full of adventures, a year with many life lessons, a year of discovering new places, but also a year with some less pleasant moments. Of course, officially we have been traveling together for more than 6 years, but exactly one year ago we left from Dusseldorf Airport on our second world trip! A new adventure, with previously visited countries, but also a lot of new destinations in prospect. We are so lucky that we can experience all of this, and we can definitely say that we really are happy! This is our overview of a year’s journey with all the special moments we’ve experienced!

On Sunday 30 October 2016, the adventure began: off to the unknown again! After an internship on Curaçao and traveling around the US ánd after a year and a half travelling around the world from 2013 till 2015, we were still not done with discovering the world, so after saving a bit more than a year we could finally leave again. This time, our first destination was Dubai! I can still see us standing over there with our heavy backpacks loaded and our surfboard, surrounded by friends and family, ready to leave our life in the Netherlands behind.

And while the farewell to family and friends was very hard, we were really looking forward to leave for a long time again. Maybe now we’ll stay away forever? Because staying in the Netherlands for the rest of our lives is something we don’t really see happening, even now after a year. Therefore, the purpose of this trip will also be to hopefully find a nice place where would like to live and where we could see ourselves getting old. So far, we didn’t really found that dream place yet, but who knows what else we will find?

Back to Dubai: because that’s where it all started. We arrived there in the middle of the night, where we had an awesome week. In that week we visited the highest building of the world, the beautiful beaches, the cute souks of Deira and Bur Dubai, we went on a day trip to Abu Dhabi and we went on a jeep safari through the Dubai desert. Dubai definitely surprised us in a positive way! So positively, that we would love to go back! And that says a lot, because we are not really city people at all. But Dubai is different. The bustle of the city, the desert, being in a totally different world, trying to be the biggest and the best with everything they build: we absolutely loved it!

And then our second Australia adventure started, in Perth. The plan was to stay here for a few months to work hard and afterwards to travel the west coast, but a few months ended up to be a whole year. It was really hard to find a good job. Bram tried to find a job in mechanical engineering, and Manon wanted to work in childcare, for which she had assessed her qualifications and arranged all the necessities. It soon became clear that it’s really hard to find a good job as a ‘backpacker’. There is not a lot of engineering work at the moment, because the mining industry collapsed, and there are so many people looking for jobs at the moment. And as an Early Childhood Teacher, Manon had a couple of interviews, but each time they chose someone who lived here permanently. Thus, in between, we both had a variety of different jobs: Bram worked as a factory hand for a company specialised in in Anodes, he worked at a camper hire company and occasionally he had casual work as a Mechanical engineer. He also helped out at some peoples home with some DIY jobs. Manon had some babysitting jobs at different families, including a dutch family, and she worked for a food truck for a while. We both regularly worked for a Dutch mini pancake stall (still a little bit of Dutch in Australia;)) and did some event work. During winter we both worked for a cleaning company in the early mornings, which earned great.

Through a neighbourhood bbq we met some nice people who lived in the same apartment complex, and regularly met each other for some drinks or food! Unfortunately we had to say goodbye to Marija in June, which made the group a little smaller. But we still had some great times!

In August we were told that Bram could probably get a sponsorship as a Mechanical Engineer at a company specialised in the food industry. We were so happy, and we made plans to stay longer and to arrange the next visa. Unfortunately this happiness turned out to be short term, because at the last moment the company decided they didn’t need Bram and that they preferred a project manager. Hello, Australian mentality! So what to do now!? With not many options left, we decided to go to New Zealand, and that’s where our next adventure will start this Sunday!

Besides working, we have also been able to discover a lot of Western Australia. We have experienced so much this year! We bought a car so we could easily get around and we regularly went camping in this car as well. In the beginning, this was even our home!

After a few weeks we rented an apartment in Mosman Park, so we had a bit of a permanent place. We liked it, even though it was all becoming a bit serious, because it, of course, is different from traveling and camping…

In the beginning we discovered all the beautiful beaches of Perth and surroundings. Our first road trip was planned for december. During Christmas we made a beautiful trip for a couple of days to the Wave Rock, a special rock!

We celebrated new years eve with friends, enjoyed the beautiful summer weather, celebrated Australia Day in Perth, which ended differently than expected (see our story ‘Australia Day 2017 in Perth’) and then had a three week holiday in February and March to explore the South West! This was truly a wonderful holiday, and we’ve seen so much during this trip! We camped in our car (sometimes in the middle of the bush), saw and climbed the tallest trees, walked through wonderful caves, surfed during sunset, tasted wine at the local vineyards, walked on the longest pier of the southern hemisphere, swam with stingrays, drove some fun gravel roads, hiked through amazing national parks, spotted a lot of kangaroos and emus along the way, visited gold mining outback towns, lay on the most whitest beaches AND chilled with kangaroos at the beach! We can definitely say this was a holiday to never forget! Certainly one of our favourite parts of Australia! In total we drove 4342km during this trip.

The time after that went by peacefully, we discovered more of Fremantle and even celebrated the Dutch Kingsday with hundreds of other Dutchies. Which was a little weird though 😉

In May we made another short road trip to the Pinnacles, to celebrate Manon’s Birthday, where we went sand boarding on the sand dunes in Lancelin, saw those weird rock formations and ran into some strange trees.

During winter it was all a bit more boring and we were less active, which caused us a bit of a winter depression, but a 3 week break to Bali and Lombok made a happy change! We enjoyed it so much! It was seriously one of our best holidays in a long time and we happily look back to it. We visited Bali, the Nusa islands next to Bali, discovered the undiscovered Lombok and chilled on paradise: the Gili islands. We felt so good over there, we lost our heart to Indonesia!

And when we returned, our last month in Australia arrived. A month where we worked to save up for New Zealand, but also a month in which we did a lot of fun things! We went on another road trip for a couple of days, this time to discover the wildflowers in WA. A beautiful route, in which we discovered more of Western Australia again.

Furthermore it was already nice weather in October and it still is, so we really enjoyed this by going to the beach and visiting a hidden rock pool in the Hills.

And now we still haven’t seen the complete west coast of Australia because we’ve been hanging around Perth for so long, so maybe we’ll be back after New Zealand…

Meanwhile we sold our car and surfboard, everything is arranged for NZ (tickets, airbnb & visa), we’re going to Rottnest Island for a few days to chill on the white beaches and then the new chapter can begin!

It was a year where we traveled, but especially a year in which we have built a ‘normal’ life on the other side of the world. Looking back, we would have done some things differently, but hey, you only learn from this experience. In any case, it has been a travel year to remember!

And are we done with traveling after this year (or actually almost 7 years)? No way, not even close! We still have so many plans: working for half a year in New Zealand, discover a bit more of Asia and then to South America via the Pacific Islands. Oh well, that’s kind of our planning, but of course this could all still change totally! For the time being, we will not return to the Netherlands soon. We feel happiest when we travel and that’s what we are going to do!

But we do miss you though!

Hey Bram & Manon! I found you guys in Nomadicmatt’s fb group we’re in 🙂 Just wanted to say hello and what a post! Showing your long journey to today. I used to live in Australia (working holiday visa) for a year but am back home in the US. Hope to stay in touch with you guys and your next journey to NZ!