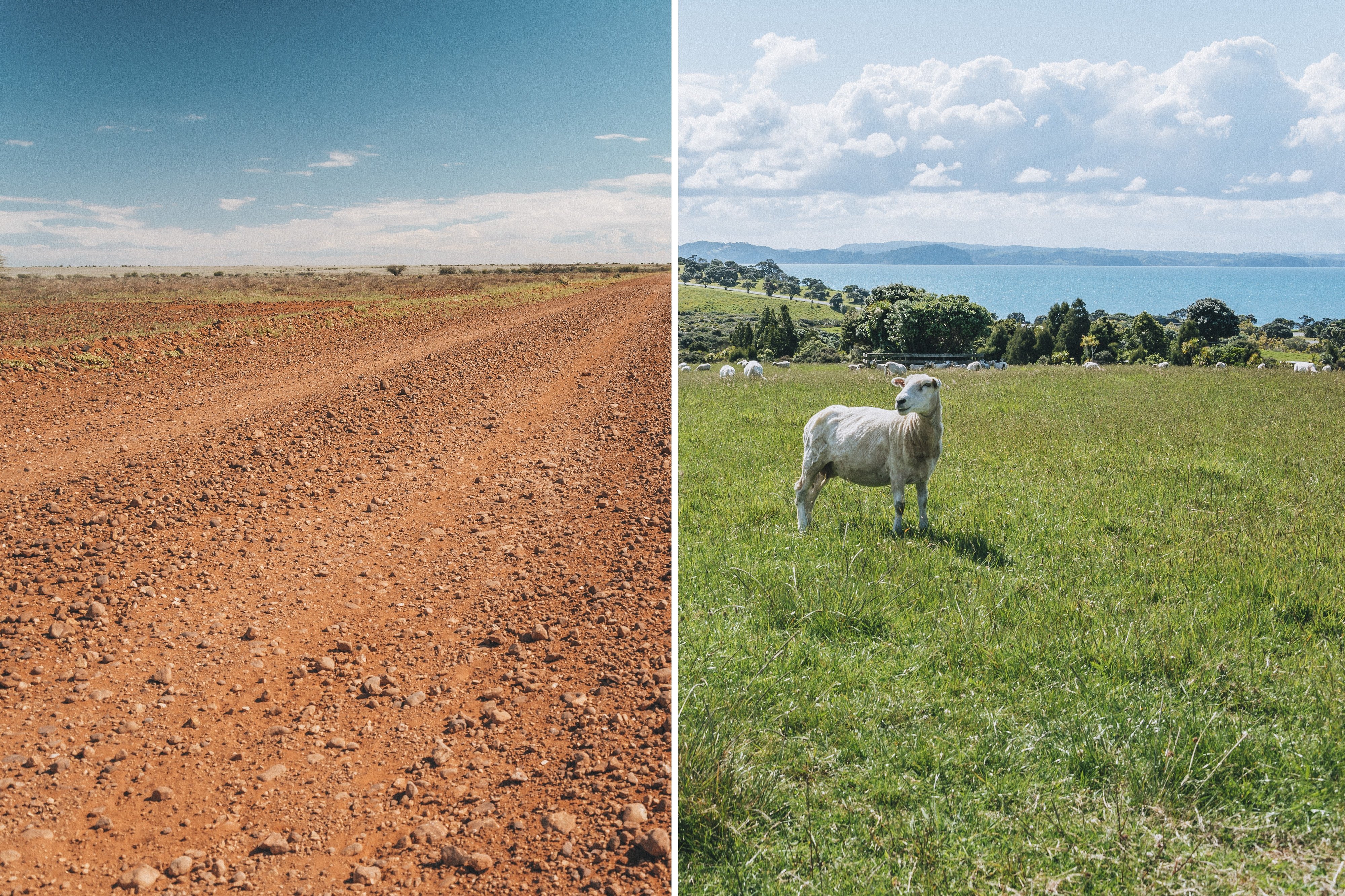 Ozzies vs Kiwi’s, g’day mate vs sweet as bro! Sheep vs kangaroos. Endless red dirt vs green rolling hills. New Zealand vs Australia: there is a constant battle and competition between the Ozzies and Kiwi’s. There are many differences between these two countries, even though there are still people in the world that think it is one big country somewhere down under. We don’t want to light up this battle, but we like to focus on the unique beauty of both countries! So in this blog, we are not going to discuss the rugby games, but instead, we like to discuss the culture and nature, to let you see that you shouldn’t choose between the two countries, but visit both!

In both countries, they use some weird lingo. You will notice that even when English is your first language, you still might not understand what the Ozzies and Kiwis are saying! Imagine when English is not your first language and you go down under. In that case, there will be times that you don’t even have any clue what they are going on about. That’s why we have some translations for you:

There are more typical words that they use in each country. The Ozzies like to shorten everything, as you can see in the following list:

And here is some more typical Kiwi slang:

Bro & Cuz – Casual way of speaking towards someone
Sweet as – Cool/awesome
She’ll be alright – It will be okay
Chur – Awesome, sweet, good, yeah
The wop-wops – A remote area
Munted – Broken or drunk
Gumboots – Rubber boots
A Hiding – Getting your arse kicked
Hard out – I agree
Long drop: – A toilet in the bush with no flushing, but with a long drop to a composting tank

As different as both languages might seem, there is also slang they use in both countries:

No worries – Not a problem, all good
Mozzie – Mosquito
Servo – Gas station
Ute – Pick up truck

Of course, there are many more examples, and some of the typical slang words might be used in both countries as well. My advice to you: when you have no idea what they are saying, just say yes and smile 😉

If you think of Australia, the first thing that pops into your head are probably kangaroos or koala’s. When you think of New Zealand this will probably be sheep or kiwi’s. Unless you are a bird lover, Australia will beat NZ by far with their wildlife. In New Zealand, the only wildlife you can find is a very wide range of birds, while in Australia… where shall we start!

There are so many cute animals in Australia, like the kangaroos and wallabies, the koala, quokkas and the wombat. You can also find emu’s, cassowaries, possums and the platypus. Then you have a lot of animals that can kill you: crocodiles, sharks, snakes, and spiders. Yes, you have to be cautious when strolling around in some places! But don’t be afraid, we spent 2 years in this amazing country and also a lot of it in the outback and we are still alive! There are also some cool birds around like the laughing kookaburra and a lot of different ara’s.

In New Zealand, there are many kinds of special bird species. Some very rare ones like the kiwi. This famous bird is endangered and you won’t probably see it in the wild since it is very shy and only comes out at night. In the south island, you can find the kea, an alpine parrot. There are so many more bird species like the fantail, kaka, weka (sometimes confused with the kiwi, but nothing alike), the rare Takahe, bellbird, kingfisher, tui and many more. Next to that, NZ is famous for their sheep population. Although they are not native and wild, there are more sheep than humans.

These two countries floating together in the southern hemisphere are completely different if you focus on nature. We really liked what both had to offer, but if you’ve been to both you will probably agree that New Zealand’s nature is something else!

‘Wow’, that’s probably the word we used most during our time in New Zealand. Again and again, we were surprised by the beauty of this country. The most beautiful coastlines, green rolling hills, and many many waterfalls. Geothermal landscapes like volcanoes, geysers and hot springs on the north island, the incredible Southern Alps, the most insane blue lakes and the stunning sounds on the south island. New Zealand has it all. It truly has some of the most incredible nature we have ever seen. It is an outdoor paradise, and you better bring some walking shoes, because you are going to walk a lot, even if you are not into walking!

Australia is very wide, but you won’t find much people living far away from the coast. It is a huge country and there is a lot to see! The east coast is the most popular part by travellers to explore, and while it is a beautiful area, there is so much more. In the south east you’ll find another popular attraction: the Great Ocean Road between Melbourne and Adelaide. More south there’s Tasmania, which has some really good nature, and in the center, you can find Uluru (Ayers Rock) as its main attraction. The west coast is truly amazing, with the best beaches in the south west. A bit more adventurous because of the not so many tourists that are going there, which makes it even better! Lastly, in the Tropical North, you have Broome, Darwin and Cairns and some amazing national parks in between. A thing we really liked was driving through the outback. Because in-between all the places, there is about nothing but red dirt and flies! It might not sound really attracting, but the nothingness has something special!

Both countries were colonized by the British and nowadays they are both western world countries. But before they were colonized, Australia was inhabited by Aboriginals and New Zealand by Maori.

In New Zealand, there is still a lot of Maori culture. You will often be greeted with ‘Kia Ora’, which is Maori for welcome. You can learn a lot about their culture, in some touristic places but also in musea and you can find history from there culture everywhere. There are even some areas where only Maori people live, although most of them are mixed with all the other cultures. A lot of place names are Maori.

In Australia, it is a bit harder to learn about the Aboriginal culture. There are some areas where you can learn a bit more, like Uluru or Kakadu National Park, but sadly a lot of their culture is wiped out. It feels like there is still a big gap between the western cultures and the Aboriginal culture, compared to New Zealand where everyone lives together. They are trying to fix this gap, but there is still a long way to go.

Huge vs Not That Small

Because of the size of Australia, it costs a lot of time to travel around and see all that the country has to offer. In New Zealand the distances are a bit shorter, but there is also a lot to see everywhere you go so it will take a lot of time to see everything as well, but you won’t have to travel really far from one spot to another.

As said above, Australia if full of red dirt, and New Zealand is full of greenery. A lot of that is to blame to the climate! Australia is a relatively dry country, although because of its size there are more climates to find. New Zealand is a very wet country, and that’s why it is so green!

In the North of Australia, there is a tropical climate. The winter season there is called the dry. Because of that, they don’t have winter there, but they have only dry and wet season (and build up/build off). During the dry the weather is perfect, blue skies, 30 degrees Celsius for at least 3 months. The wet season is very humid, very hot, there are many floodings and it is hard to travel because many roads will be flooded. The southern part has more seasons: in the summer it is warm or hot, and dry. In the winters it is not so warm and there is more rain. It still depends on where you are.

New Zealand’s summers are quite warm and with some humidity. The north island is often a slight bit warmer than the south island. During winter the more north you go, the warmer it is, in northland often still 15 degrees. You can find snow on the mountains on both islands, but the south island will be a bit colder than in the north. It really depends on which area you are. There are some really wet parts in New Zealand, but also some really nice parts that are not so bad all year round. The good thing is, it is always green. We are used to depressing winters, with bare trees, but in New Zealand most of the trees are still green, and when the sun is out it is really nice to be outside!

And the winner is…

If you ask a traveller which country he likes the most, you often won’t get a straight answer. Simply because of the reason that each country has its own beauty. As you read above, both countries have some great reasons to visit. So why not visit both and decide for yourself! It depends a lot on what kind of places you are into. We have had great times in both countries, and they both have a special place in our hearts!

Read all our other blogs about New Zealand here and Australia here!

We hope you’ve learned a bit more about both countries and that you know what the main differences are now. Let us know if you can choose between Australia and New Zealand and which country is your favorite!

Check out all our other Tips & Tricks here!

Are you thinking of doing a trip to New Zealand, and want access to all our tips and secret photo locations? CLICK HERE!

Buying a Car or Van in Australia: Complete...

The 20 Best Instagrammable Spots on the South...

The 18 Best Instagrammable Spots on the North...

Camping in Australia: Everything You Need to Know

Loved this comparison break down guys. This was such a fun read!

Thank you Krista! Glad you liked it 🙂

Haha we think both countries are amazing! But we have to agree, regarding nature New Zealand wins hands down 😉