A Mini Guide to NYC – By Nomadic Matt 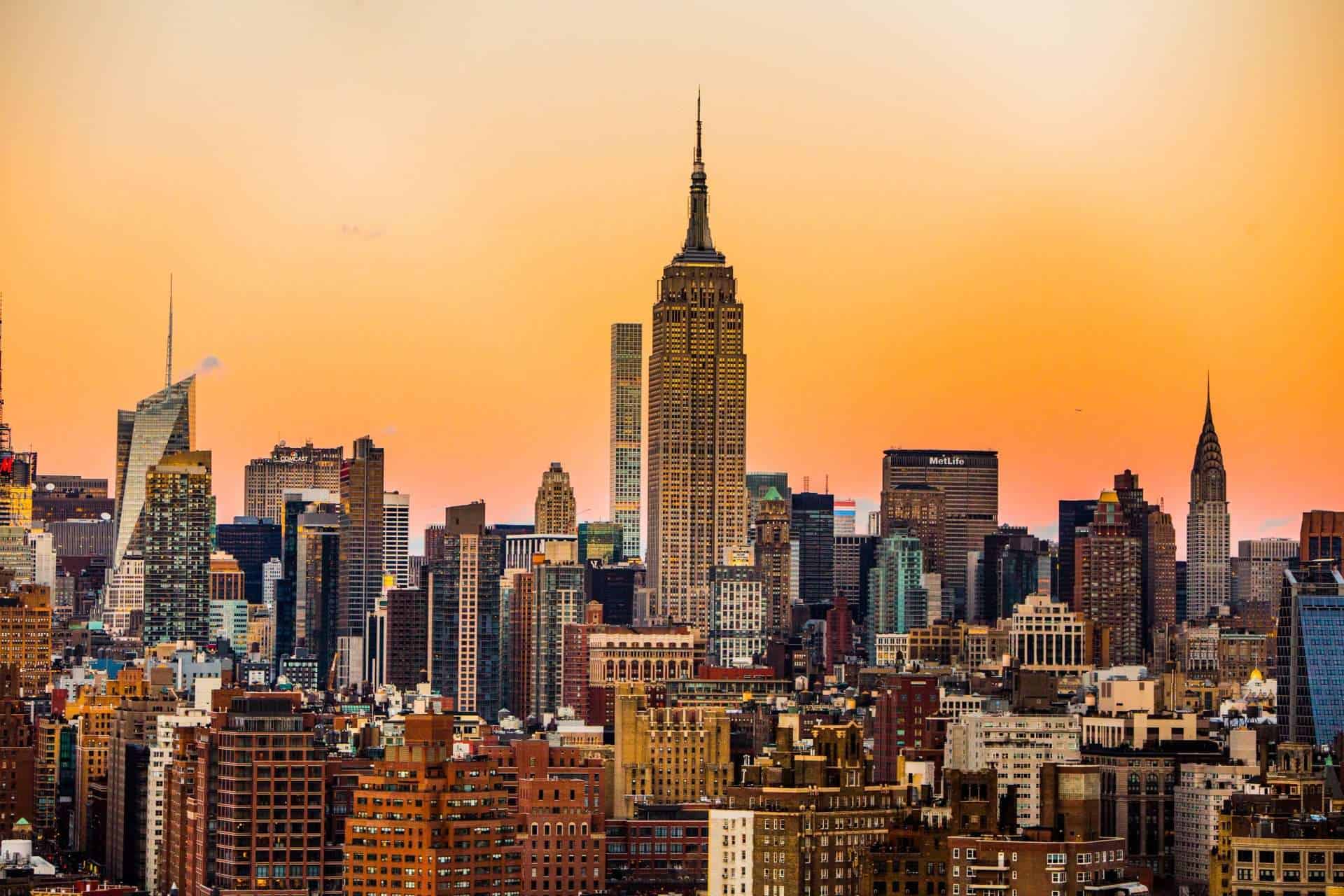 New York is one of my favorite cities in the world. It’s one that I called home for six years, written a guidebook about, and visit so often my friends joke that it’s like I’ve never moved away.

NYC is home to some 10 million people who collectively speak over 800 languages. You can find every culture in the world here. It’s famous for its incredible art scene, award-winning museums, diverse restaurants, world-class theater productions, cocktail bars, history, festivals, and more.

A lot of visitors get sticker shock visiting the city and its reputation as being one of the most expensive cities in the world keeps a lot of people away. There’s no doubt the city is expensive and many prices have gone up. Luckily, there are plenty of things to fill your New York City itinerary that won’t cost you an arm and a leg — if you know where to look!

Things to Do in NYC

Designed by famed and prolific landscape architect Frederick Law Olmsted in 1858, Central Park is the perfect (and free!) spot to relax in the city if you want to get away from the hustle and bustle. It has plentiful meandering paths, bike lanes, and even ponds where you can go rowing. The park spans a massive 843 acres so you can easily spend hours wandering around, people watching, and picnicking.

During the summer, there are often free concerts and theater productions (line up early for tickets to Shakespeare in the Park). From the late spring to the early fall, there are also free guided walks run by the parks service (they have all kinds of paid tours available too).

2. Go on a free walking tour

There are dozens of walking tours in New York to choose from (including many free ones), in seemingly every niche possible, from colonial history to Jewish history to ghost tours to Mafia tours to food tours to pub crawls. The list goes on!

My two favorite free tours for budget travelers are:

The High Line is a walking trail made from a converted elevated train track. It’s an extremely popular urban walking park on the west side of NYC, stretching 1.45 miles. The trail is dotted with overlooks, gardens, food stalls, and public art, not to mention lots of greenery. Having opened in 2009, it receives over 8 million visitors each year!

Go for a walk, sit with a book, people watch, and take in the city. This is one of my favorite things to do on a nice day. (The new Whitney Museum of American Art is located near the southern terminus of the park. It’s worth visiting too, or at least admiring the incredible architecture from the outside!).

4. Stroll along the Brooklyn Bridge

Located near City Hall, the Brooklyn Bridge was the longest suspension bridge in the world when it opened in 1883. Today, it’s a major tourist attraction and local icon. You can’t visit the city without seeing it up close.

If the weather is nice, walk the 1.6 miles across the bridge into Brooklyn to enjoy the waterfront park on the other side (it takes about 25 minutes). If you plan to stop and take photos along the way, plan for 40 minutes.

While the city skyline is photogenic at all hours, I suggest going in the evening so you can admire the bright lights of the city.

This is New York’s massive historic train station. Opened in 1871, it was going to be torn down in 1975 but was saved by Jackie Kennedy (First Lady to the late President J.F.K), who raised money for its preservation. Today, the station spans 48 acres and has 44 platforms — more than any other train station in the world!

I love coming to the main concourse and looking up at the “stars” in the ceiling as everyone races to and fro. There’s also an amazing eatery in the basement called the Grand Central Oyster Bar & Restaurant. If you want to splash out on fancy (and expensive) cocktails while you’re here, visit The Campbell and step back into the 1920s (dress code enforced).

Standing 305-feet tall (95 meters), the iconic Statue of Liberty is a massive neoclassical statue on Ellis Island. It was gifted to the USA from France in 1886, designed by French sculptor Frédéric Auguste Bartholdi (though its metal framework was built by Gustave Eiffel, of Eiffel Tower fame).

While it’s spectacular to see up close, the real highlight is Ellis Island, which served as a major immigration station from 1892-1924. Here, you can learn about the immigrant experience and get a sense of the people who helped build NYC (you’ll even find my family’s name inscribed on the wall). There’s such a great sense of history there that you can’t help but be impressed.

The ferry to the island and access to the statue’s pedestal is $23.80 (the crown is currently closed due to COVID).

On September 11th, 2001, almost 3,000 people were killed in a series of terrorist attacks in NYC and elsewhere around the US. This free memorial lists the names of everyone killed during the attack. While somber, it’s a must-visit; 9/11 has had a huge impact on the city and the people who live here.

Afterward, take in the view from the new “Freedom Tower” (which was built to replace the collapsed World Trade Center buildings). On the elevator up, you can see pictures of the historical development of the city and how it’s changed over the years.

To get a deeper understanding of 9/11 and the events that unfolded, visit the nearby museum. It’s home to moving exhibits that illuminate the scope and significance of the tragedy, including testimony from survivors, recordings on 911 calls, remnants of the steel from the building and aircraft, and more. Admission is $26.

Built in 1698, Trinity Church is one of the oldest churches in America. Originally built by the Church of England, when the British seized New York during the Revolutionary War (1775-1783), the church was used as a British base of operations. After the war, George Washington (the first President of the USA) and Alexander Hamilton (the first secretary of the treasury) regularly worshipped here.

The graveyard dates back to the 1700s and is the resting place of many famous Americans, including Alexander Hamilton and his wife Elizabeth, Francis Lewis (signatory on the Declaration of Independence), and Horatio Gates (Continental Army general).

NYC has a plethora of world-class museums that you could spend months exploring. While you probably don’t have that long, it doesn’t mean you shouldn’t see a few when you visit. Here are my favorites (in no particular order):

The Bronx Zoo is one of the oldest and biggest zoos in the United States. Opened in 1899, it’s home to over 650 different species, including tigers, bison, elephants, giraffe, gorillas, and more. The zoo is over 300 acres and sees over 2 million visitors each and every year. It’s the perfect place to visit if you’re traveling with kids. Admission is $39.95.

I’m not much of a sports fan but even I know that NYC has some world-class teams. Even if you’re not a die-hard fan, games are a fun activity if you’re traveling with friends or want to meet some local sports fans. Prices vary, but you can often find tickets for $20 or less, making it a fun way to spend a few hours.

If you’re looking for some incredible places to eat, here are 13 that are really good:

How to Save Money in NYC

NYC can be expensive, no question about it. But there are tons of ways to save money here too so you can enjoy the city without going broke.

Here are a few ways to save money in New York City:

New York is well connected by subway, which can take you wherever you need to go, or close to it. (And riding it is an experience in and of itself.) But fares can add up fast if you pay $2.75 for each ride. To save money, get the seven-day unlimited MetroCard. It’s $33 so you just need to use the subway 12 times to get your money’s worth!

NYC is home to some of the best museums in the world. Many offer free entry (usually a “pay-what-you-wish” policy) on certain days of the week. Some that offer discounted entry or free admission are:

The days and discounts vary, so be sure to check the museum’s website for more information. Most require you to book your visit in advance.

3. See the Statue of Liberty from the Staten Island Ferry

While the Statue of Liberty is spectacular to see up close, not everyone wants to pay over $20 to see it.  If you’re on a tight budget, take the Staten Island ferry for photos of the statue and the city skyline instead. The ride takes about 20 minutes each way and is free, so you can pass the statue twice and snap as many photos as you’d like!

4. See a Broadway Show at a discount

You can’t come to the Big Apple and not see a Broadway show. Theater is a huge part of the NY experience and there are tons of incredible Broadway (and off-Broadway) shows here every season.  Since tickets can cost in the hundreds, visit the TKTS booth in Times Square to get half-price tickets. You’ll need to arrive at the counter the same day to see what tickets are available, and the wait is usually an hour, but that’s worth it to save a bunch of money!

Accommodation in NYC can be very expensive. Even hostels aren’t cheap! To save money on your accommodation, use discount rates like AAA or AARP, and websites like Mr. Rebates or Rakuten, which can get you 1-4% cashback. Also, check out HotelTonight, a hotel-booking app that’s perfect for last-minute bookings.

SnapTravel is another great resource (it sends hotel deals straight to your phone or Facebook account). You can save up to 50% off the price of a hotel with them. They are a helpful, under-the-radar service that has saved me a ton of money.

Find all hotels in NYC here

While New York City can certainly be pricey, a visit doesn’t have to break the bank. True, it’s never going to be a dirt-cheap destination, but by enjoying the abundance of free parks, museums, and attractions, you can explore this amazing city without missing out.

Matt Kepnes runs the award-winning travel site nomadicmatt.com, which helps people travel the world on a budget. He’s the author of the NYT best-seller How to Travel the World on $50 a Day and the travel memoir Ten Years a Nomad. His writings and advice have been featured in The New York Times, CNN, The Guardian, Lifehacker, Budget Travel, BBC, Time, and countless other publications. You can follow him on Instagram at @nomadicmatt. When he’s not on the road, he lives in Austin.

Check out all our other travel guides here!

Felucca Nile Cruise in Egypt: a Must Do Activity