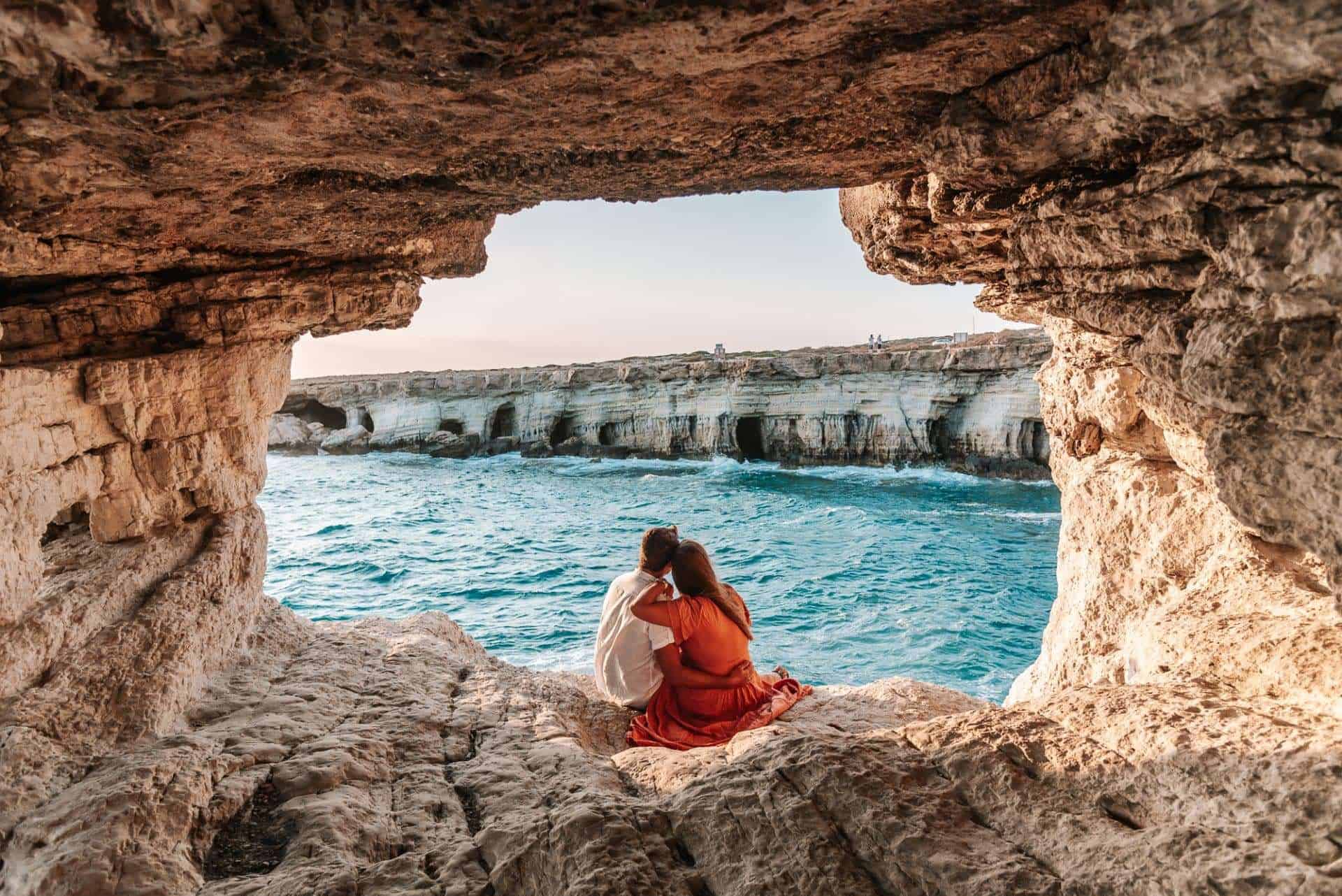 Cyprus is an island country located underneath Turkey in the Mediterranean Sea. Although it’s technically located in Asia, it’s still part of the European Union (except for the Northern part of the island). The island has strong Greek influences but you can also notice Turkish influences. It’s slightly bigger than Crete. With a rich history and beautiful coastlines, it’s a great island to combine a beach holiday with culture. So who’s ready for some Cyprus travel?

Cyprus is divided into two parts. The southern part is known as the Republic of Cyprus. The northern part is known as the Turkish Republic of North Cyprus but is only officially recognized by Turkey. Normally it’s quite easy to travel between the two, however, rules apply which we will describe later in this blog. Because of the pandemic, it was pretty hard to visit the northern part, so in this blog we will only focus on the southern part of Cyprus.

We traveled to Cyprus at the beginning of September 2021 and traveled all over the island. There is plenty to see and visit and in this Ultimate Cyprus Travel Guide, we will tell you everything you need to know about visiting this country.

needed to see it all

The southern part of Cyprus is part of the EU and is a so-called Schengen Country. Residents and citizens from other Schengen countries, EU, or EEA do not need a visa to enter. If you are from another country you have to check this website to see if you need a visa or not.

The northern part is not recognized by Europe and is considered “illegal”. Both parts have airports but if you arrive in Cyprus in the northern part you are not allowed to go to the southern part because they say you illegally entered Cyprus and the EU. However, you can fly out from the northern part towards Turkey without problems.

For Covid related requirements, we would advise checking this website.

Cyprus has a Mediterranean climate with warm summers and mild winters. During the winter months, there is a lot of rainfall, especially during December and January. Day temperatures vary from 33°C (91°F) midsummer to 17°C (63°F) in the winter months.

The best time to visit Cyprus is from May to October when the weather is warm and there is not much rain expected. If you don’t like the big crowds we could advise you to avoid July and August which are the hottest months as well. If you like warm sea temperatures it’s best to go between July and October.

The currency used in South Cyprus is Euro.

The price for one night in a hotel starts at around €45. A dinner for two at a mid-range restaurant costs about €20 to €30.

The official languages in Cyprus are Greek and Turkish. Locals however also developed a Cypriot dialect. Most people also speak English.

At most places like hotels and restaurants, there is free wifi. If you have an EU sim-card roaming is at the same cost as your normal abonnement. Be careful around the green zone (the line that separates the northern and the southern part) because your phone might switch to a Turkish provider and that can be expensive.

Cyprus is an island quite far away from the mainland and you can only travel to Cyprus by plane. There are 2 international airports in the southern part: Larnaca and Paphos. Larnaca is the biggest of the two. Then there is a third airport in the northern part, Ercan Airport, but as described above, entering through this airport is considered illegal by the southern part of Cyprus and the EU. If you are going to visit Turkey afterward you can fly out from this airport without a problem, since it offers the cheapest flights into Turkey.

Getting Around in Cyprus

Cyprus is the third largest island in the Mediterranean and it offers several ways to travel around. Our preferred way of traveling around in Cyprus is renting a car so you can explore the whole island easily. If you drive from Ayia Napa in the east to Polis in the west it is over 200 km. The roads are really good and there is a highway along the southern coast. Please take note that Cyprus is a former colony of Great Britain and they drive on the left side of the road. You can also rent a motorbike or quad bike, but as mentioned above it’s a large island and you might get a sore bum.

When renting a car in South Cyprus, you can easily cross the border over to North Cyprus. There are 8 border crossings in total. Firstly check if your rental car has an insurance to drive in North Cyprus though. As told before, the other way around (going from north to south) is not possible by rental car.

Another option to go around is by public transport. There is a good public bus system running from Monday to Saturday. Furthermore, you can also book tours to get from one point to another. The third option is to take a taxi.

Larnaca is the biggest city on the east side of the island. Some of the things we would recommend to visit here are:

Ayia Napa is located in the most eastern part of Cyprus. It is famous for its many resorts and hotels but besides that, there are many incredible places to visit here like:

Nicosia is the capital of Cyprus, located in the north of the southern side. The city is divided in two because the green line runs straight through it for almost 60 years already. The green line is the UN-forced buffer zone, a kind of no man’s land between the north and the south side. The places we recommend visiting in Nicosia are:

Lefkara is a small town with real cute streets filled with Greek vibes and shouldn’t be missed during your Cyprus travel. It’s also the birthplace of the Cypriotic lace called Lefkaritiko. We would advise visiting this town as a little detour when you make your way from Larnaca to Limassol or the other way around. It’s the perfect place to wander around in the cute streets, have a chat with the friendly locals, and get some souvenirs.

Limassol is a city where you can find many ancient sights which are worth visiting.

In the center you can find:

West of the city you can find more amazing places:

If you drive further towards Paphos we would recommend you to visit Aphrodite’s Rock, one of the most famous places in Cyprus.

Paphos is the biggest city on the west side of Cyprus and a great base to explore everything in this area. Some of the places you should not miss in the center of Paphos:

And the things close to Paphos we don’t want you to miss:

If you don’t plan on renting a car or want to know more about the history of Cyprus, then its worth to book some organised trips. This way you’ll still see plenty of the island!

Cyprus is quite a big island, and if you want to travel all around Cyprus we would recommend to staying in a couple of places spread out over the country. We listed a few options per city. Some are budget, some more luxurious.

Located in the center of Larnaca and only a 5 minute walk from the beach this is a affordable place to stay.

Studio from €48 per night

This luxurious adults-only hotel with a rooftop pool is located in the center of Larnaca, close to the beach.

Double room from €173 per night

Find all hotels in Larnaca here!

These apartments are located in the center of Ayia Napa, approximately 1km from the beach.

Apartment from €58 per night

Lovely hotel with a large pool right at the beach. You can read more about this hotel below.

Double room from €154 per night

Pavlo Napa Beach Hotel was a great place to stay. We ended our Cyprus travel trip here to relax and explore the beautiful surroundings of Ayia Napa. The hotel was located perfectly, right on the beach of a small bay and close to the most popular Nissi Beach. The large pool with many sunbeds was great for relaxing. It offers stays with breakfast only, but also half board or all-inclusive options. We had a great stay and love to come back here someday!

Nice rooms located in the old center of Nicosia, close to the Green Line and the shops and restaurants.

Double room from €44 per night

This luxury hotel is located on the edge of the old city center and offers great service.

Double room from €175 per night

Find all hotels in Nicosia here!

Nice hotel with parking place in the big city of Limassol.

Double room from €62 per night

Beautiful hotel with a large pool right at the beach.

Double room from €261 per night

Find all hotels in Limassol here!

Located a bit out of the center but with a lovely pool and close to the beach.

Studio from €49 per night

Double room from €250 per night

Find all hotels in Paphos here!

Read all our other blogs about Cyprus here!

We hope you will enjoy your Cyprus travel trip as much as we did! The mixture of Mediterranean and Turkish vibes are pretty nice to experience. If you have other suggestions, which people should not miss, you can leave them behind in the comments below.

Check out all our other travel guides here!

A Mini Guide to NYC – By Nomadic Matt

This was very interesting and informational read, thank you!
My holiday is in Paphos this July, so I am doing some more research right now.
This is so nicely written and detailed that I kind of feel like I have visited it already 🙂

Thank you so much for the compliments Niklas! We are happy to hear that you loved our article and we are wishing you a great holiday to Paphos! Have fun!

Just quick heads up, Cyprus while in the EU is currently not in Schengen yet (similar to Ireland, Romania, and Bulgaria).

Thanks for this info Harry! We didn’t know about this and will edit this in our article!